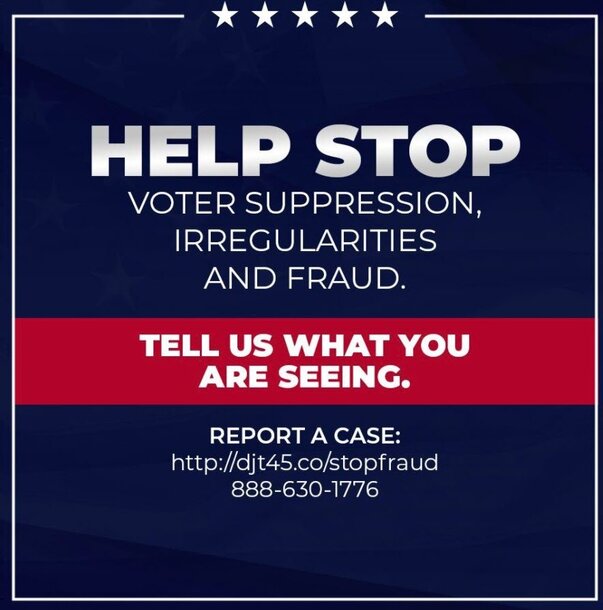 ​I am sure you've heard the mainstream media announce “Biden is the President elect” and declare him the winner of the election.

I am asking you to push this “news” to the back burner and to keep on fighting. The fight is far from over. We Americans MUST demand open and fair elections. We've all heard of the many irregularities compromising the integrity of our elections; claims of voter fraud, ballot harvesting, thrown away ballots caught on video, and reports of machines “glitching” to give one candidate thousands of votes. If we want our votes to count and matter, our voices heard, then we Americans must demand truth, transparency, and integrity of the entire election process. Otherwise, we are a Banana Republic.


This Morning's Phone CallThere was a telephone conference call this morning that included President Trump’s legal team. There are 4 states that were discussed, but in actuality, there are 5 states that have legal battles.

GA and WI both will have recounts statewide. I received an email from Congressman Jeff Duncan of SC who must have also been on the call. Looks like he took better notes and I am copying and pasting this part from his email which is more in depth.

"Here is a state by state breakdown of where we are:

Arizona: Arizona continues to move in our direction as votes are cast. Just minutes before the call, the state released a new batch of votes and the President now only trails by 20,484 votes. There are over 100,000 votes left to count, and the campaign continues to believe that they will ultimately win the state. Once again, Fox News and the AP should reverse their call of AZ for Biden because it is not reflective of what's happening on the ground.

Georgia: Georgia is headed into a recount because the totals are so close, and there are military and overseas ballots that have yet to be counted. The Trump campaign also has evidence of illegal ballot harvesting taking place in three heavily Democrat areas and believes a recount will provide important transparency. Trump is down by only 7,248 votes in Georgia.

Nevada: Of all the states in the country, the Trump campaign believes the worst implementation of the election has taken place in Nevada. Even before the election, I pointed out that Nevada was one of the states where they were mailing ballots directly out to people instead of ballot applications. As a result, they have numerous reports of people receiving multiple ballots in the mail, or ballots for people who used to live at their address. In Nevada, the Trump campaign has already identified 3,000 people who cast votes in the 2020 election who were ineligible to vote. Trump is down in Nevada by 22,657 votes.

Pennsylvania: There are around 105,000 provisional ballots left to be counted in Pennsylvania plus military and overseas ballots. A big issue in Pennsylvania has been a lack of access for election observers in Philadelphia in spite of court orders demanding otherwise. Another issue is ballot "curing," the process where election officials change ballots by adding information to them to make them legal or making assumptions on how people intended to vote. Not only is this illegal under PA law, but it appears to have been implemented inconsistently across the state.

All combined, we're talking about a total vote difference of just 84,743 votes in all four of these states."

The Time to Fight Back is NOW!The future of our Republic is at stake.

Here is a link where members of the group and hopefully everyone, can write to the supreme court and ask for a through audit and investigation for all 50 state election returns.

Below is a letter than you can cut and copy and mail to President Trump.

As an informed and responsible citizen, I am angry and disheartened by the fraudulent efforts to subvert the presidential election. The process itself has become flawed - not only by the mail-in process, the lack of polling oversight, the media campaign siding with the Democrats - but also with the Dominion servers and machines that tally votes whose ownership and management are all linked to the Biden campaign.

I urge you to request a state-by-state AUDIT of all ballots. This must be done to ensure election integrity - not only of this election - but for all future elections.

We, the people, have a right and a responsibility to vote our conscience and have only our ‘legal’ votes counted.  I know neighbors of mine received multiple ballots mailed to them. California and other states have proven in past elections that dead people have voted.

Sanctify our voting rights! If you do not do this now - we are headed for a one-party system as the machines will control election outcomes and our individual voices will be purged.

Stay strong and be successful.