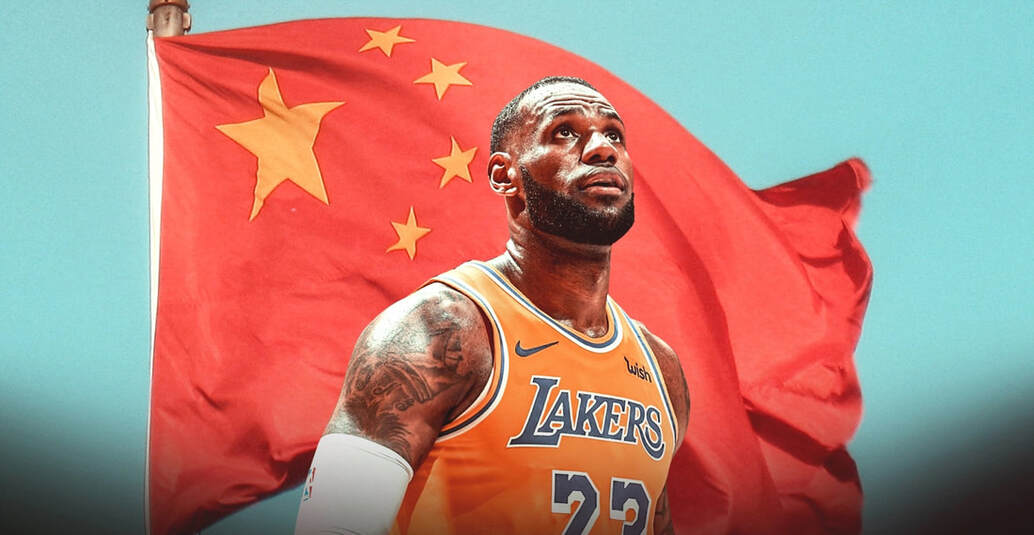 China gets the NBA to shut up and dribble
CLICK HERE TO JOIN OUR NEW FACEBOOK GROUP!! 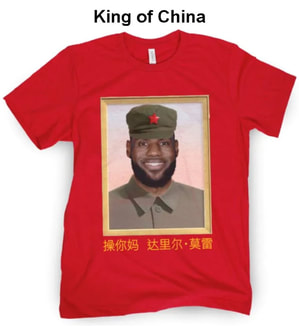 When National Hockey League games used to turn into brawls, the joke was “I went to a fight and a hockey game
broke out.”

Now you can tune into a social justice protest and a Chinese Basketball Association game might break out.

​It’s actually the National Basketball Association. But if you’ve tuned into the season restart at Disney World and followed the money, you know why the NBA should rename itself after its favorite country.

Along with dunks and free throws, we’re being treated to the world’s most privileged Black Lives Matter protest.
​Inside the Disney bubble, players and coaches sport BLM T-shirts. The slogan is painted on every court. Instead of their last names, players have league-approved slogans like Justice Now; Anti-Racist and Respect Us on their jerseys.
The few players who don’t kneel during the national anthem are asked to explain their rebelliousness.

​If you really believe Black lives matter, the last group you should support is Black Lives Matter with its goal to “disrupt” end the nuclear family. But if players think and defunding police will make lives better for Black people, it’s a free country.
Just one request.
Amid all the preaching, would someone make a peep about a country that commits more human rights abuses in 10 minutes than the U.S. does in 10 years?
​
Don’t press your ears against the NBA’s bubble waiting for an answer.
The league officially declared it has no soul in October, when Houston general manager Daryl Morey sent one measly tweet supporting the democracy protests in Hong Kong.

The Chinese Communist Party started pulling NBA games off TV and merchandise off shelves. With its multibillion-dollar relationship threatened, the NBA quickly bowed in subservience and sent Morey to re-education camp.

Since then, the NBA has stayed mum as China ransacked all rights in Hong Kong, unleashed COVID-19 on the world and herded countless more Uighur Muslims onto trains bound for slave labor camps.

​Somewhere, Laura Ingraham must be cackling.
The Fox News host famously advised LeBron James to lay off the politicking and “shut up and dribble” two years ago. That inflamed America’s woke citizenry, which sees sports stars as social justice martyrs in the mold of Muhammad Ali.

The difference is Ali risked his career with his Vietnam War stance. Today’s jocks risk nothing, yet James fancies himself Joan of Arc in sneakers.
He said Rep. John Lewis taught him to “never be afraid of conflict, good conflict, positive conflict that can create change.”
Never be afraid — unless Xi Jinping might cut off your shipments of Chinese greenbacks.

If James had the courage of his convictions, he’d demand Nike move its manufacturing plants from China to his hometown of Akron. Problem is, you just can’t find good slave labor in Ohio these days.

When asked to explain why its moral outrage ends at the water’s edge, the NBA says it can’t involve itself in every little human rights abuse on the planet. But the entire Basketball-Industrial Complex is eyeball deep in China.

“Imagine you have a kid who’s 13, 14 years old, and you’ve got a grown coach who is 40 years old hitting your kid,” an American coach told ESPN. “We’re part of that. The NBA is part of that.”

Try not to puke when you read the league’s reaction:
“I’m not an expert in every human rights situation or violation,” Deputy Commissioner Mark Tatum said. “I’ll tell you what the NBA stands for: The values of the NBA are about respect, are about inclusion, are about diversity. That is what we stand for.”

Tell that the Hong Kong dissidents or Uighurs or all those happy campers in NBA academies. If they could watch the NBA’s bubble games, they wouldn’t see slogans like “Speak Up” and “Liberation” on jerseys. They’d see “Hypocrite” and “LeFraud.”

I don’t question the sincerity of players who want to make lives better. But there are a billion lives in China desperate for influential social justice warriors to speak up for them.
So tune in to the NBA’s Black Lives Matter festival. If players keep dribbling away in silence, you’ll know the only color they really care about is green.

CLICK HERE TO SEND AN EMAIL TO THE NBA

Well, that is no longer the case. The NBA decided to enter into politics and take sides with a communist organization (BLM) that pits Americans against each other. The hypocrisy is grand because the NBA has a huge contract with the Chinese Communists that pays them grandly.  These communists, who subsidize the NBA, subjugate a whole section of their citizens. It is believed that the Chinese government has detained up to a million Uighurs over the past few years in what the state defines as "re-education camps". The government is now also accused of a programme of forced sterilisation against Uighur women.  Apparently, this is acceptable to the NBA.

In addition, the NBA players are allowed to wear the names of known criminals on their jerseys and the NBA prints racist messages on their courts. Well, I am done with the NBA. DONE. No more games on TV, in person or in any venue. No more memorabilia. The NBA has taken the fun out of sports and put a political spin on their games.

What is so puzzling is that the NFL tried this and their viewership declined. Apparently the NBA did not take notice.  Well, now that the NBA has become politicized, I have chosen to boycott the NBA. I wish the NBA had stayed out of politics and had stayed in the business of entertainment.

No more NBA in my house.

Sincerely,
Here are some tweets below

[email protected] In his speech on China at The Wilson Center, Vice President Mike Pence called out the @NBA and @Nike @disney for their response to the fallout that occurred when an NBA executive voiced support for pro-democracy demonstrators in Hong Kong. #TNM

[email protected] @nba @nike @disney @NYKnicks @BrooklynNets @OrlandoMagic @PelicansNBA @okcthunder @DetroitPistons ‘Twas the night I bowed to China and they keep on doing it, now we know who the elites take their marching orders from CHINA #TNM TheNewMovement.org

[email protected] "My team and this league just went through a difficult week." I think people need to understand what CHINA tells you what you can and cannot say @celtics @Hornets @Pacers @MiamiHEAT @UtahJazz #WeStandWithHongKong #TNM TheNewMovement.org

[email protected] @nba @NBAonTNT getting rich off @nike and Chinese ppl. Tell truth. Ya keeping ya ignorant mouth shut about humanity being abused killed in China because of money ya making. Ya trying to insult ppl? #WeStandWithHongKong TheNewMovement.org