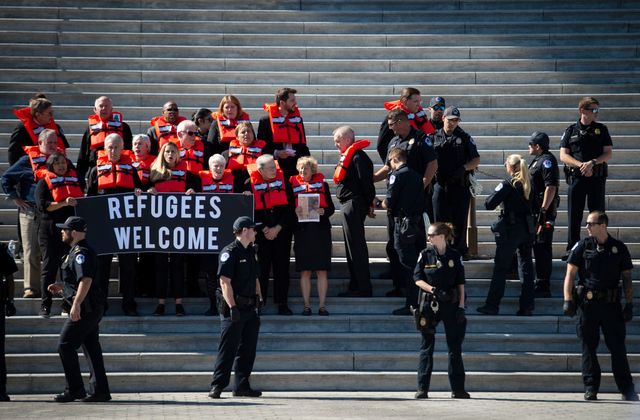 We need to take care of our VETS and take a "pass" on the refugees
WASHINGTON — Texas Gov. Greg Abbott on Friday became the first governor in the country to refuse to take in refugees, but 18 of his 26 Republican counterparts have chosen to open the door to refugees, much to the surprise of the Trump administration.
In a September executive order, President Donald Trump gave states and local governments the right to reject refugees, but instead of saying no, most state and local officials have blindsided the administration by opting in, according to two former officials familiar with the matter.
Some of the local governments choosing to accept refugees voted heavily in favor of Trump in 2016, after an election campaign in which he vowed to clamp down on immigration and the flow of refugees — particularly Muslim refugees.
“They thought they were throwing red meat to their base. It’s a spectacular blowback for them,” said a former senior U.S. official familiar with the discussions, who did not want to be named. “It was a mistake to assume that just because it whips people up at a Trump rally, that it will have the same effect on people in a community.”

Join our FaceBook group we are dedicated to fight back​!
Here is a letter to copy and paste if you know your Governors email address

To the Office of the Governor:

As a taxpaying citizen of this great state, I insist that you do not accept these refugees, who will deplete our state resources that are badly needed to rehabilitate and help the thousands of our own state’s homeless and great vets. If my request to vote NO on this very important issue is ignored, you will NOT be rewarded with my vote on your next election.

2.No more refugees into our state. Our tax $$ should fund the homeless and our vets! A vote for more refugees is a NO vote for your re-election. #NoToMoreRefugees @TNMORG @GovernorLittle @GovLarryHogan @GovParsonMO @FabKalEl

5.No more refugees into our state. Our tax $$ should fund the homeless and our vets! A vote for more refugees is a NO vote for your re-election. @GovKevinStitt @govkristinoem @GovBillLee @jcthomas57 @TNMORG @FabElKal #tnm